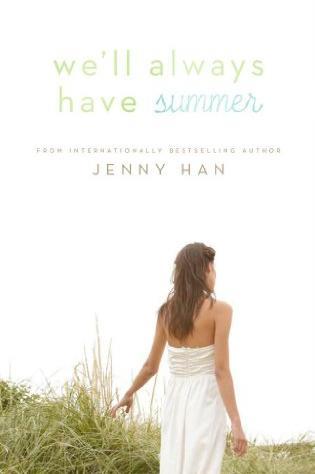 Publication Date: April 1, 2011
Synopsis:
It’s been two years since her relationship with Conrad. Two wonderful years that she’s spent with Jeremiah. And when Jeremiah offers her what she’s always wanted – to be a Fisher – Belly only has one answer.
But as the wedding draws closer, Belly realizes that marriage means she’ll be choosing one brother over the other for the rest of her life. She’ll have to break one of their hearts. But who?
BookDepository
Rating: 4.5 stars

Thoughts:
Jenny Han does a marvellous job of making me wish I were in a relationship, with the way she writes romance, boys, and dating. I don’t think I’ve read any other contemporary books before that made me go, “Aww, I really wish I had a boyfriend right now,” because that usually happens with either fantasy or dystopian books. So, thank you, Jenny Han, because now I might have to read your other books to get rid of this feeling.

I really needed this book as a pick-me-up after reading Only Ever Yours earlier this week, and as usual, it was exactly what I needed. A dose of cute, fun romance to get me back into the swing of reading.

I had no idea that a YA contemporary series could really get so dramatic and intense. I told my sister that I was about 10 pages away from the end of the book and still had no idea how things would turn out, which almost never happens to me. Yet, Jenny Han managed to keep me on my toes with a really good conclusion to this fun trilogy.

As usual, I enjoyed the romance greatly. Jenny does a really good job of writing no-so-realistic romantic situations (tell me, how many times have you been in love with a pair of attractive brothers whom you’ve spent your entire life growing up with?) in the most realistic way possible. I felt for Belly and I understood her struggle. The common thing would be to say, “Oh, but you have two brothers pining over you, how could that possibly be a difficult situation?” But that’s the thing, it is a difficult situation simply because they’re brothers. Heck, even if the boys were best friends, it’d still be tricky. But Jenny Han dealt with it really well and did a fantastic job of exploring all the reasons why it wasn’t such a simple decision to make.

I don’t think we give MCs enough credit when they’re in love triangles. I know that there’s so much talk about how unrealistic love triangles are, and I agree, but I do think that some people end up having to deal with them in real life. Picking one guy over another is never really that easy, not when you have strong feelings for both and care about them both a lot. It’s not easy to love two people and have to choose between them, neither is it really fair for anyone. So, this is me saying that while I personally would have made a different decision from the one Belly made, I’m not her and she chose the best person for her (besides, it means I can have the other brother).

For a contemporary, this really had me guessing. I had no idea how the book would end, which is unusual, because contemporaries usually have a pretty clear ending. Well, maybe I didn’t know how to it would end because I wanted a different ending. I didn’t get the ending I wanted, but I could see why it was the best way to wrap the series up. It was the right thing for the characters, but I’m slightly biased against it because I like one brother a lot more than the other.

The only reason why this remains as a 4.5 star book for me, and the entire series is a 4.5 star series, is because Belly can be really annoying. Even with the time jumps and her growing older, she can still be really immature. I was happy with the ending though. It didn’t end exactly the way I wanted it to, but it was really satisfying and I enjoyed it a lot.

Character(s):
Belly is 18 in this book, turning 19 soon. That’s the same age as me as I write this review. So, I should have been able to relate to some of her decisions (not about marriage), but I still found her to be less mature than I feel I am when it comes to romance and relationships. She’s has grown up though, I’ll give her that. But I wish she were more level-headed and mature when making decisions instead of making them on a whim.

Conrad has grown up too. Less annoying and less of a jerk. I liked him so much more in this book than I did the first two, mostly because he finally showed me that he could be someone aside from an angry jerk who took it out on the people who cared most about him. I think that by the end of this book, he became the kind of guy I wouldn’t mind being friends with, which is a huge leap from being the guy I wanted to punch in the face more than once.

I have to confess that guys like Jeremiah are the reason why I prefer the nice guy over the bad boy. I love this boy to bits, even though he’s made choices that I don’t agree with and want to yell at him for making. But that doesn’t change the fact that I wish he were real because I’d love to date a guy like him in real life. Heck, I hope that my future boyfriend will love me as much as Jeremiah loves Belly.

Overall:
4.5 stars. It’s a truly great trilogy, and it’s something that is light, fun, and nice to read when you need a little pick-me-up. I’d definitely recommend this trilogy if you’re curious and want to see how you like it.

Read More »
PrevPrevious PostReview: The Amazing Book Is Not On Fire by Dan Howell and Phil Lester
Next PostReview: Beautiful Darkness by Kami Garcia & Margaret StohlNext