Review: The Amazing Book Is Not On Fire by Dan Howell and Phil Lester 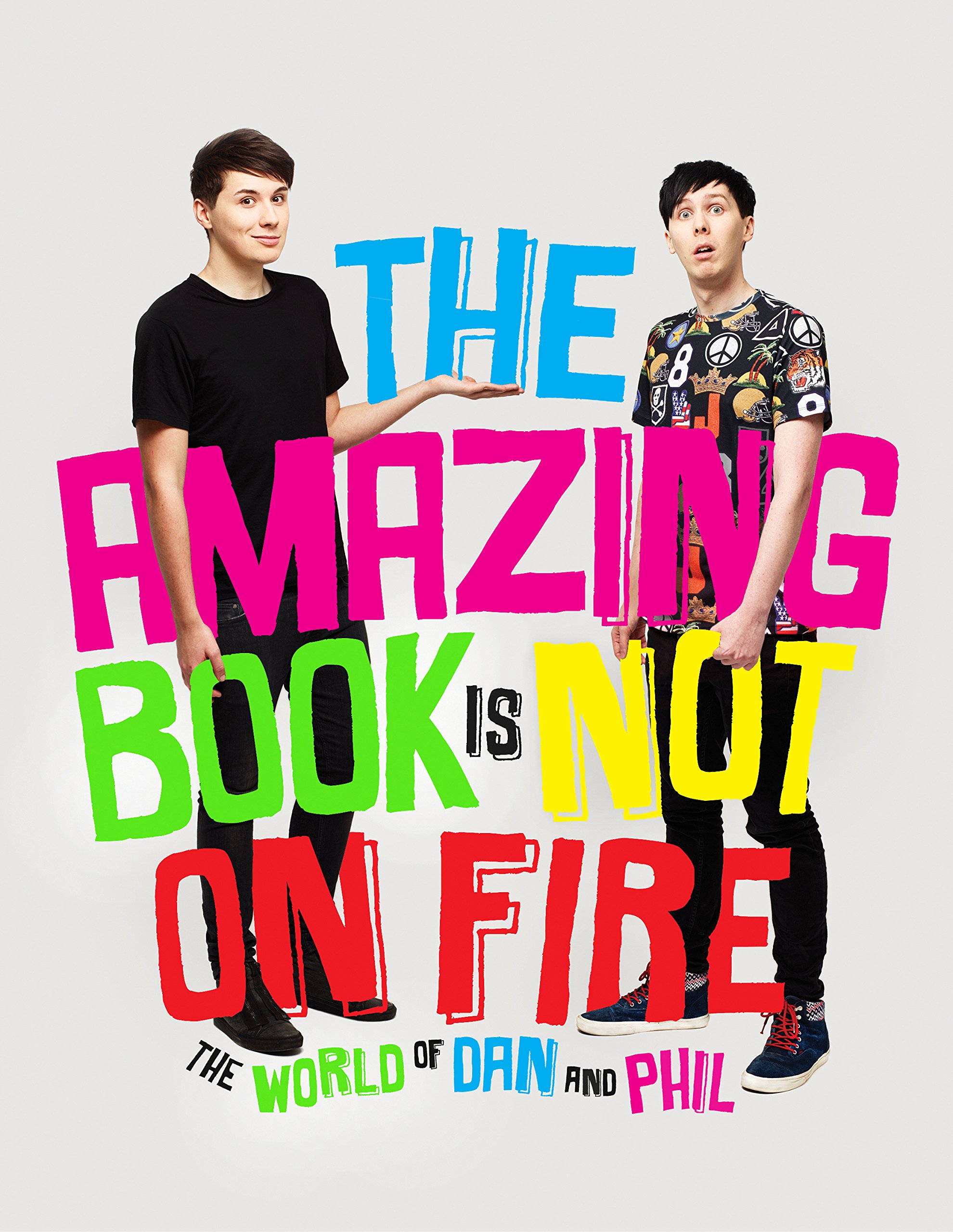 Synopsis:
Pft, you want a synopsis? Two amazing YouTubers spent an entire year making this fully-colored, 228 page book by themselves and managed to keep the whole thing a secret.

Lucky us, we get to experience it now that they’ve unleashed their sass onto the written page.

Thoughts:
Let me point out here and now that this is in no way a serious review. There is no possible way that I can review this seriously, partly because it is intended to be humorous non-fiction, and partly because it is the creation of Dan and Phil. I will just be reviewing my overall experience and thoughts about the book. Don’t worry, NO SPOILERS as Dan would not approve (merely talking about my experience would probably make him cringe).

I want to start out with a preface that I’m fairly new to the Phandom, as far as most other people are concerned. My sister told me that I needed to check out their gaming channel, so I did. About 2 videos later, I had fallen in love (and couldn’t figure out who was who yet at that point). So really, I’ve only been watching them since late Sept-early Oct 2015. It took me approximately 3 days to become utterly obsessed and spiral into the abyss of watching all of Dan’s videos before moving on to Phil’s. Let’s not get into the part where I’ve re-watched almost all their videos multiple times.

This book, along with the audiobook and their 2016 calendar, were the only things I asked my dad for when Christmas rolled around. He said yes after I awkwardly explained my love for two dorky, British guys on the Internet (my dad is getting used to it by now). I planned to keep this for a slump or for a sad day, but randomly decided to pick it up after finishing Winter earlier this week. Best decision I made all week.

Not only was it a fantastic experience of reading through the fully-colored, 228 page book they had created, I had the immense joy of listening to their 4 hour and 26 minute narration of the book, with bits of banter sprinkled in between. I found myself laughing, smiling like a complete idiot, shaking my head, cringing, and experiencing the kind of discomfort that can only result from a Dan and Phil conversation. And I loved every minute of it.

Mostly, this book dives into their lives before YouTube, how they started out, and what their lives are like now. It’s full of wonderfully written work and is a truly great experience. Whether reading or listening to the book, I think anyone who picks this up will find themselves enjoying it greatly. As long as you know who these weirdos are, that is.

Personally, I loved having them narrate the book while I read it. Yes, I could’ve read it in half the amount of time it took them to read it to me, but I think I would’ve missed out on the journey that was listening to them talk for 4.5 hours. I don’t think I could ever complain about listening to them talk for 4.5 hours. Heck, I could listen to them talk all day long and still be completely fine. The narration made it all better. There were extra tidbits of information and overall, was just something that I found myself smiling at constantly.

This will definitely be a book that I pick up to cheer myself up with or if I ever hit a reading slump. I’ll probably also always listen to the audiobook as well. It’s kind of strange, but I find that Dan and Phil both have very comforting reading voices, so it makes me love the book even more.

I know that there’s a lot of talk and controversy surrounding YouTubers and their books, but really, I just consider this an extension or a bonus from their channels. I’m sure that each YouTuber who got a book deal had their own reasons for going through with it. Whatever that reason is, it’s entirely up to them and I’m not going to say anything about that. I know that The Amazing Book Is Not On Fire (or TABINOF) is something that Dan and Phil wanted to create as another way of sharing their lives and experiences with their fans. They have also said that this was simply the way they thought was best and most accessible way for their fans to experience such a project. Being booklovers themselves, I also think it’s wonderful that they’re contributing to the publishing industry. It’s completely fine if you disagree with everything I just said, you’re entitled to your own opinion on this subject. I just wanted to clarify mine slightly.

Lastly, I just want to say that I’m so incredibly proud of these boys (men, whatever, they both still need adult supervision) for all the hard-work that they put into creating this. The amount of time and energy they spent with this project before revealing it to us is simply amazing.  I love both of them so much and I will continue to support their work and any other kind of content that they put out (someone start that petition for them to make an album with “Ladders” as the lead single, please).

PS: Having them narrate this while I got to look at numerous pictures of them made my heart flutter on countless occasions. Just thought I’d mention it

Character(s):
I don’t think it’s fair to call either of them characters since they’re actual human beings. But since this is here, I do want to take the chance to talk a little about their respective writing styles. Dan and Phil create a perfect balance between the two of them, which comes across very naturally in both their writing and narration.

Phil is definitely more chill in his writing, which also comes across when he narrates. He’s more laid-back and keeps a light-heartedness around the book that I very much enjoy.

Dan, being the master of sarcasm that he is, is also the guy who puts big words into his writings simply because it makes perfect sense. It’s not because he’s being stuck up or “posh,” it’s just because it makes sense if you’ve ever seen one of his videos. Of course, his sass and dark thoughts are also something I tend to be able to relate to more.

Overall:
5 stars. If you’re a fan of Dan and Phil, I’d say this isn’t a bad book to pick up. I enjoyed it a lot. If you’re not a fan of theirs, then this probably isn’t something you’d want to read because of their specific kind of humor and personality, it might be too weird at certain moments.

Read More »
PrevPrevious PostReview: Only Ever Yours by Louise O’Neill
Next PostReview: We’ll Always Have Summer by Jenny HanNext