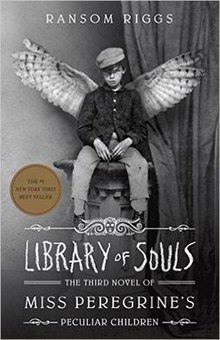 Jacob and Emma have been separated from the other Peculiars. The wights have taken everyone, but nobody knows where they've gone.

Without their friends by their side, Jacob and Emma are desperate to find them and stage an escape. Even if it means never coming back alive.

Thoughts:
I flew through this book in less than a day because I needed to know how everything was going to come to an end. The suspense of finding out what happened to everyone was driving me to turn pages.

This is definitely less action-based than Hollow City in the sense of the book as a whole, but it definitely has some great action in the second half. I enjoyed the change of pace from the high-stakes intensity of Hollow City as I had the chance to spend more time with Jacob and Emma. It was a good way to explore more of their relationship, as well as set up the end of the trilogy, and I greatly enjoyed what I read.

As I have mentioned in my two previous reviews, I'm not a big fan of Jacob and Emma's relationship. In fact, their relationship is the only thing I don't like about this series, because I find it to be really irritating. By the end of the trilogy, I still couldn't understand what they liked about each other because they never talked about it. Jacob never mentioned anything about Emma's personality or character that draws him to her, he just keeps saying that he could never leave her because it would break him. There's also a spoilery element (if you haven't read any of these books) that makes me really uncomfortable. People who have read the book will probably know what I'm talking about, and even as the book ended, it was still something I couldn't get over.

Romance aside, I've come to really enjoy the friendships in this book. The way Miss Peregrine's Peculiars band together and do their best to save each other is probably my favorite element of the entire trilogy. I haven't read many YA books in this genre (I think it falls under fantasy?) that delve this much into friendship and the drive to keep each other safe. It's a really nice change and I loved seeing how the cast of characters interacted with each other and supported each other.

I was pretty satisfied with the ending and didn't have any problems with the way things were wrapped up, except in the case of Jacob and Emma's relationship. I had no lingering questions that couldn't be answered, and I felt very happy to see how the trilogy wrapped up. Part of me wishes that I could see these characters once more, but I'll just have to re-read the books to do that.

Character(s):
I enjoyed Jacob's character development over the course of the trilogy, and I like the person he was at the end of this book. It was great to read the books from his perspective, as I doubt it could have been told in any other way. There's something about being in his head and seeing how he reacts to things that makes the book more engaging.

Like I've said before, I enjoy Emma as a character on her own, but not as a love interest. I feel like I can relate to her a lot because of where she stands in the group as a leader that everyone trusts. The way she is able to compartmentalize in order to make sure everyone is safe is something I greatly admire in characters.

We don't really see much from the rest of the Peculiars because they're separated from Emma and Jacob, but I will always love everyone. Except Enoch. That boy annoys me to no end.

Overall:
5 stars. I would highly recommend this trilogy if you haven't already read it. It's a really fast-paced and engaging read, and I think it's easy for a lot of people to enjoy.
NextReview: United We Spy by Ally CarterPrevReview: Hollow City by Ransom Riggs