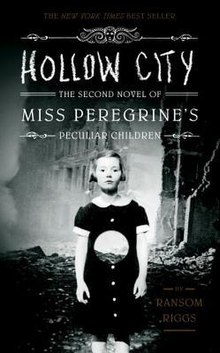 Jacob and several of Miss Peregrine's Peculiar Children have left their island. Running for their lives to save the ones they care about, they find themselves in the middle of World War II with no idea what to do next.

Each day is getting more difficult than the last and enemies racing to find them, Jacob and the Peculiars must stay together and forge their way to an end goal that might kill them.

I raced to start this book almost immediately after finishing Miss Peregrine's Home for Peculiar Children and read the first 100ish pages that night during my commute to and from church. It always surprises me how quickly I can fly through these books. On average, my reading speed is about a page a minute, but once I really get into these books, I can get up to a page and a half, maybe even a page and 3/4s.

I found that I was more engaged in this book sooner than with the first one. I was able to get absorbed more quickly and enjoyed the story more because it was diving right back into the middle of the action, rather than reading a huge set-up like first books usually are. That isn't to say that the first book isn't great, but the first half definitely wasn't as action-packed as the rest of the series so far.

The love story still bothered me just because the level of strangeness hasn't changed. The idea of Jacob and his...they're not even boyfriend and girlfriend. Okay, back to my point - the idea of Jacob and this girl being together kind of puts me off because so far, I still haven't seen any evidence that they each other for anything more than physical attraction. He has yet to mention something about her personality that draws him to her, and despite them not knowing each other for very long (maybe a couple of weeks at this point in the series), he claims to already be in love with her. I know that this is really common in YA because there are teenagers who actually do this in real life, but because I'm such a realistic person when it comes to romance, I find that characters falling in love after knowing each other for a few weeks usually puts a frown on my face.

The action in this book is far more jam-packed and high-stakes than the first book, seeing as everyone is running for their lives now. Even though the intensity had cranked up, I didn't feel like I lost any substance from the story, as can sometimes happen when more action scenes start taking place. I enjoyed seeing how Ransom Riggs constructed each scene toward the end of the book and being able to see everything come together so perfectly.

Reaching the end of the book made me want to pick up Library of Souls immediately, but I told myself to stop and take a bit a of breather before continuing, especially since I had to wake up and take care of a few errands in the morning. But hopefully, I'll be picking up the final book tonight before I head to bed.

I'm really enjoying the process of watching Jacob grow more into himself as a character. Seeing the different between who he started as and who he is at this point makes me really enjoy reading from his perspective. It's great to see him start gaining more confidence and being more assertive, especially when the situation calls for him to make a decision for the sake of everyone.

I have mixed feelings about Emma because I feel like I relate to her position as the leader and frequent decision-maker in the group, but I also have a hard time liking her for more than a chapter at a time. There were plenty of moments in which I really admired her, but then a few pages later, I would get annoyed at something else she did.

At this point, I think Millard might be my favorite Peculiar because of how he conducts himself. We don't really read about him as much as some of the other characters, but whenever we do, Ransom Riggs really makes it count. Millard is the kind of teen you'd want to babysit your little sibling or child because you know that he'd take really good care of them.

Enoch annoys me to no end with his constant pessimism. I can be pessimistic at times, but Enoch really takes it to a whole new level. As he hasn't contributed anything useful in this book, it really makes me wonder what Ransom Riggs has in store for him. I'm hoping that something might redeem him a little in the last book, but I have my doubts.

Bronwyn is honestly one of the sweetest characters I've come across in awhile. The way she balances herself as the mom of the group really shows her caring nature. I love reading about her because it's nice to have a character who is so loving.

There are several more characters in the book who are part of the group trying to run away, but I don't really have much of an opinion of them just yet. The ones I've mentioned are the ones that have stood out to me, and also appeared the most.

Overall:
5 stars. I flew through this in 3 sittings and am so excited to pick up the last book in the series. I would definitely recommend this to people who are looking for a interesting adventure story.
NextReview: Library of Souls by Ransom RiggsPrevReview: Miss Peregrine's Home for Peculiar Children by Ransom Riggs