Review: Lola and the Boy Next Door by Stephanie Perkins 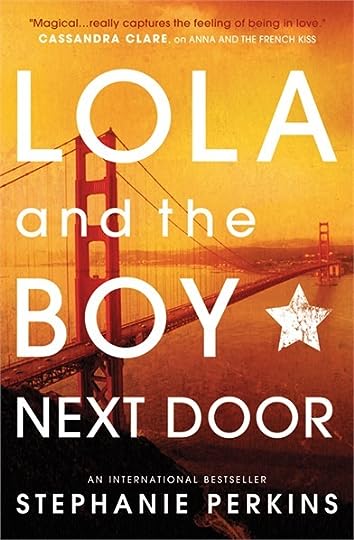 Synopsis:
Lola Nolan has always aspired to be a costume designer. Along with her boyfriend Max, who is in a rock back, she knows what she wants for her future.

Until the house next door becomes occupied again. Her old neighbours, the Bells, are back. Once upon a time, she was friends with the Bell twins, then things changed.

Now, with Cricket Bell back in her life and seemingly flirting with her, Lola has no idea what to do and isn’t so sure about what she wants anymore.

Thoughts:
I decided to pick this up because I was in the mood for a quick contemporary that I knew I would like, and this didn’t fail deliver exactly what I wanted.

I liked Stephanie Perkins’ previous book, Anna and the French Kiss, quite a lot when I first read it last year. So when I reached for this book, I knew that the chances of me liking it were pretty high. I actually knew even less about this book than I did the previous one, so going into it quite blindly, I found that I quickly grew to enjoy the plot and the characters. It was easy to get into the story and I somehow found myself relating to the plot enough to become invested after only a few chapters.

People like to call Stephanie Perkins one of the queens of YA contemporary, and I don’t disagree. She has a great talent for writing them and for creating wonderful characters and romances. I’m not usually one for contemporary love stories because I find them incredibly dramatic and most conflicts can be solved if the two characters would simply communicate, but this is different. There’s plenty of communication between the characters and the love story is believable enough that I could relate to it in certain levels.

I enjoyed reading about Lola’s life and how she handled the return of the Bells, along with other things that a girl in high school needs to worry about. The plot kept my attention and the romance had me wanting to read more to find out what would happen and how it would all play out.

Finally, when the ending came about, I was a little surprised that everything wrapped up so quickly, yet it was so well done that I couldn’t complain. Everything had its resolution and I had no more questions after the book ended. Part of me does wish that there was maybe one or two more chapters, but at the same time, I do think that the timing of where the book ended was perfect for the story. And besides, I’m pretty sure I’ll see these characters again in the last book.

Character(s):
Lola was a very interesting character to read about. I don’t think I’ve ever read about someone like her or met someone like her before. Her quirky sense of style is actually quite brave, as she doesn’t really care what other people think of her elaborate outfits and willingness to just be herself.

As of right now, I think I prefer Cricket to St. Clair. Cricket is just more my type of guy and his genuine personality makes me wish he were real so that I could get to know him. Even as a friend, he is such a great person. Everything about him appeals to me and I enjoyed reading about him throughout the book.

Overall:
5 stars. I would definitely recommend this trilogy to anyone who likes contemporary and hasn’t picked it up yet. The three books revolve around different characters that all appear in subsequent books, but I don’t think there’s a need to read them in order. It would just be nice to do so as you get a little more out of the books and don’t end up spoiling yourself.

Read More »
PrevPrevious PostReview: Everything, Everything by Nicola Yoon
Next PostReview: The Assassin’s Blade by Sarah J. MaasNext