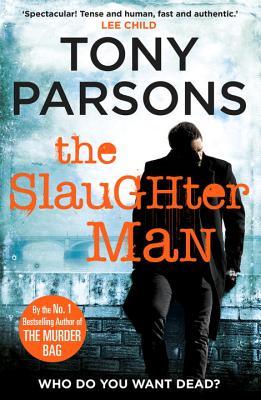 Publication Date: May 21, 2015
Synopsis:
A dead family shows up on New Years Day, killed in the most gruesome way. If that wasn't bad enough, the youngest child of the family has gone missing.
Detective Max Wolfe is determined to find the killer before another dead family turns up, or a dead child. But when the clues lead him to a convicted killer who previously murdered another family, Detective Wolfe can't help wondering where the child fits into the story.
BookDepository
Rating: 3.5 stars

Thoughts:
This was my first full book for BookTubeAThon 2017, and I knew that it was going to be a quick read because it's one of those mass market paperback crime novels you often see in bookstores. I hadn't heard anything about the author or the series previously, but the prologue of the story had me intrigued.

I'm sad to admit that apart from the discovery of the murder weapon, nothing about this book surprised me. Maybe it's because of the amount of crime novels and mysteries that I've read over the years, or maybe it's my love of crime shows like Criminal Minds and NCIS kicking in, but I had the ending figured out before the halfway mark. I already had my suspicions and I think that this book just wasn't as complicated as I had wanted it to be.

That's not to say that I didn't enjoy the book. I enjoyed it enough to give it 3.5 stars, but it sadly falls into the category of crime mysteries that failed to make me wonder who the murderer was. I did, however, enjoy reading about the relationship Detective Wolfe had with his young daughter, which I found to be incredibly refreshing. It's not often that you read about detectives who have good relationships with their children, much less ones who do their best to make it work when they have primary custody after a divorce.

I wish the book was more fast-paced, as it felt like several of the chapters could have been mashed together or eliminated. Being around 400 pages, it did drag and took awhile to become interesting after the initial murder. While I read it in a day, I had to intentionally set aside time to read it because I didn't find myself interested enough to want to find out more, which was a let-down after the intriguing prologue.

In the end, I think that the ending was well executed and that it packed a decent punch. For people who enjoy the occasional crime novel, this would definitely be more interesting, but I just found it too simple for my liking.

Character(s):
I did enjoy Detective Wolfe's character, as I liked that he was a caring father and good detective. It was really nice to see how much he tried to make sure he spent time with his daughter, even though his job kept him busy. I can't say that I found him to be a great detective, but I liked him enough as a character.
Overall:
3.5 stars. I would recommend this if you're not super into crime mystery novels, but beware that it might drag a little in the beginning and toward the end.
NextReview: Stars Above by Marissa MeyerPrevReview: Unwholly by Neal Shusterman