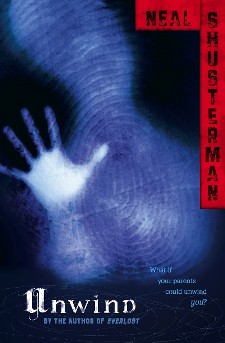 Synopsis:
The second Civil War has deemed that until a child is thirteen, their life cannot be touched. But between thirteen and eighteen, those who are trouble, unwanted, or too expensive for the state can be unwound. Their parts will go to other people, and the lives of these children will fulfill a greater purpose.

For Connor, a troublemaker, it's the worst thing that has happened to him. For Risa, a musician, it's her fate as a state ward who isn't talented enough to be kept alive. For Lev, it's giving up his life to make life better for other people. Until everything changes.

Thoughts:
I picked this up as my first re-read because I intend to finish this series before going back to college. I read this for the first time about 3 or 4 years ago and only got up to the second book in the series before deciding to wait for the hardcover boxset to release. And then I never got around to finishing the other two books, so I've decided to restart the series.

I've heard that a lot of people aren't really fans of this series, but I've always loved it. I've always enjoyed the darker side of it and the way it looks at what is essentially abortion. The philosophical nature also appeals to me, but also has a tendency to hurt my brain. Re-reading this book reminds me of my Philosophy class in freshman year and how we had an entire unit on what makes a human human, and another unit on who you are if your body is divided into separate beings that live on.

What appeals most to me is that Neal Shusterman takes the debate surround abortion and turns it into a story that could very well take place in the future. He kind of makes it obvious that he favors one side over the other, but he very practically explores both sides of Unwinding a person and how that affects society. As dark, disturbing, and creepy as this series may be, I think it does a very good job of exploring the topic of abortion and the right that a person has to live.

The book is still as action packed as I remembered it being, and having read this once before, I flew through the book in about a day. It was wonderful to be back with characters I forgot I loved, and to see how they develop over the course of the story. The way the book shifts between numerous perspectives allows me to get a better idea of what it's like to live in this world, and also gives me a very rounded worldview within the story.

I found it just as enjoyable as I did the first time around, and if anything, I think that being quite a bit older has given me a better understanding and appreciation for the story. I may be older than the character in this book, but that doesn't affect my ability to relate to them and feel for them. If anything, I'm able to understand them a little better because I'm older than them and have gone through the similar feeling of not knowing what the future holds.

Romance is a fairly minor aspect of the story, though it is hinted at throughout the book. Knowing that a love story isn't the main focus of this book makes it more enjoyable and realistic, because really, who has the time to think about romance and love when you're trying not to be taken apart and put in storage until someone needs part of you? When the romance does come up, it serves the book well and doesn't take away from the point of the story.

The ending of the book was just as impactful as I remember, and it made me want to pick up the second book immediately. First books that do that well always make me happy.

Character(s):
I have loved Connor from the moment I first started reading about him. I'd say he's a little different from most other YA male protagonists because he's not necessarily the good guy or the bad guy. He's just a kid who doesn't want to die. What makes me love him so much is that he's realistic. A guy like Connor is very much someone I could meet in real life, and I love that.

Risa is another character that I love because of how she's able to think fairly clearly despite the emotional circumstances she may find herself in. I enjoy that she's often the voice of reason, and that she brings a calm certainty to the characters in the book.

I think Lev annoyed me a lot the first time I read the book, but this time around, I'm able to understand his decisions more. Maybe it's that I'm now about 7 years older than him, but I'm not as frustrated by him as I used to be. Part of me is easily able to see why he goes through his specific arc, and I think Lev portrays an important part of life that many teenagers go through - trying to figure out who they are, who they want to be, and what they believe in and stand for.

Overall:
5 stars. I'd recommend this book if you're comfortable with being slightly disturbed with the notion of a person being unwound. It's a little creepy because of what it talks about, but I think the series is worth giving a shot because it does a great job dealing with this topic.
NextReview: Unwholly by Neal ShustermanPrevReview: United We Spy by Ally Carter