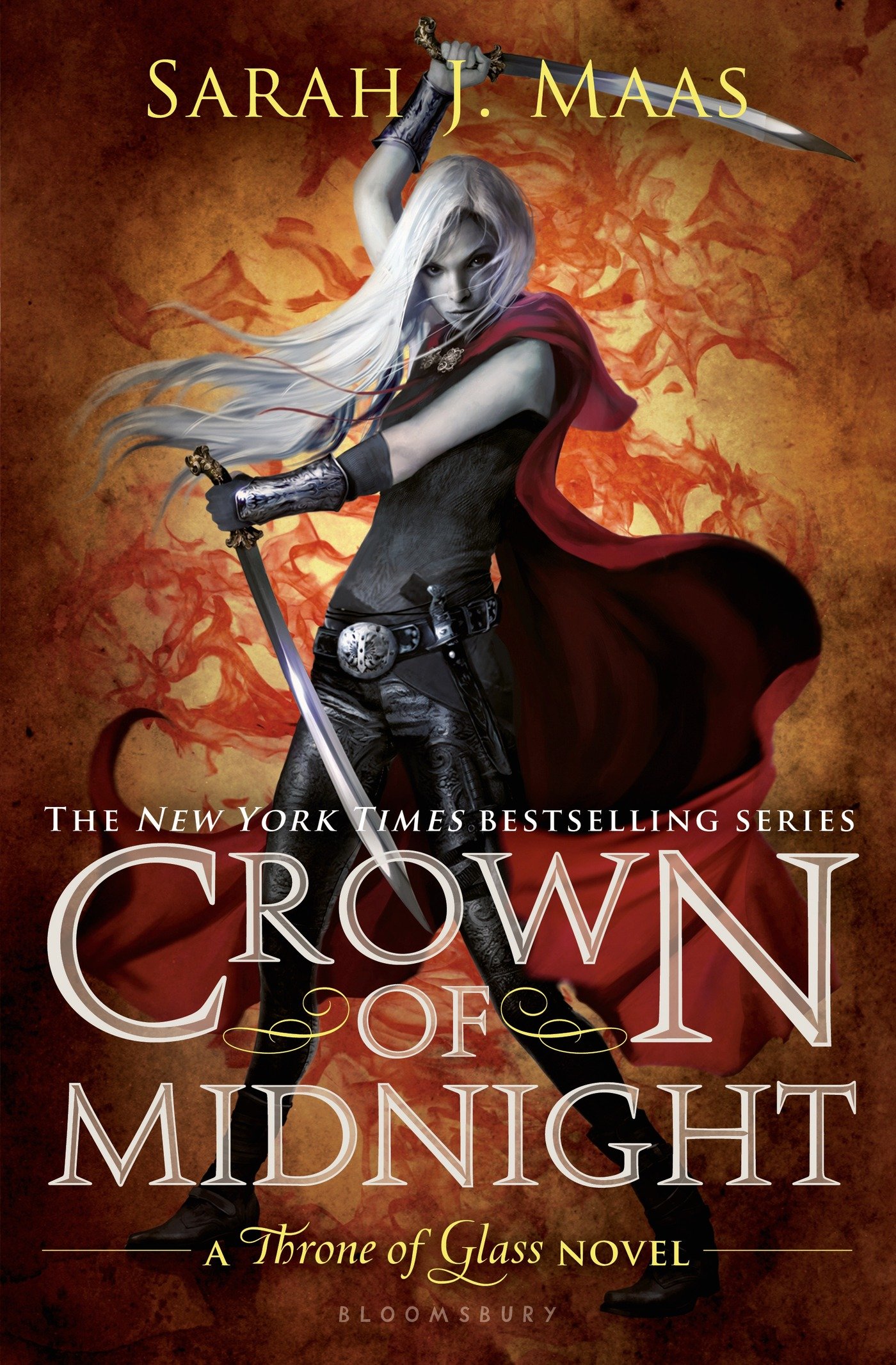 Publication Date: August 15, 2013
Synopsis:
After becoming the King’s Champion, Celaena Sardothien begins getting her hands dirty with the king’s enemies, only to find out that the task Elena Havilliard gave her isn’t over yet. Evil is still lurking in the castle walls, and Celaena is the only one who can find it.

Thoughts:
I was super excited to pick this up after the being in a slumpish mood for awhile. I needed something exciting that I knew I would love, and this was exactly that.

I highly doubt that this review will be very detailed, as it is a sequel and I don’t want to spoil anyone. Also, most of my notes are just me fangirling over my ship and talking about how much I love Chaol.

From the very beginning, things were action-packed and exciting. I had no problem re-immersing myself into the world, and found that I was able to follow along much better now that I was more familiar with the world. I can also proudly say that I’m less scared of certain creatures in the book and can now appreciate the thought that Sarah J. Maas must have put into their creation.

I was really interested in what would happen in this book, seeing as I don’t read the synopsis of sequels. I wanted to go into this really blindly, which I was able to do, and found that I really enjoyed the direction it went in. The action wasn’t overdone and didn’t feel crammed into the plot, relationships were explored and characters went through more development.

It did take me longer to read this book, but that had nothing to do with the book at all. I was simply distracted and kept putting off reading the book. It got to the point where I wondered why I wasn’t reading the book when I was enjoying it so much. It wasn’t like I was too busy to read, or that I was keeping up with too many TV shows (quite the contrary actually, I’m behind on several shows), I was simply distracted by my recent discovery of AmazingPhil, danisnotonfire, and their gaming channel. I know you’re currently judging me for procrastinating my reading because I found a couple of YouTubers, but that’s really what happened. Oh, and the debut Pentatonix album came out, so I’ve really been distracted by that too.

Getting back on track, I’ll talk a little more about the direction of the plot. This book was definitely a little darker than the first book, but that didn’t stop it from having funny moments.

Actually, now that I think about it, I don’t think I talked much about the humor in this series. Let’s go into that a little. Basically, with both books, I found myself laughing out loud in various scenes while I was out in public. I received several weird looks for bursting into giggles on a train, and then more weird looks when people realized I was holding a book and not a phone or tablet. The humor in this series balances out the dark moments and reminds you that despite the gravity of the situation that these characters are in, there can be moments of fun and hilarity.

Something that I really like about this series are the relationship dynamics. Sarah J. Maas does a fantastic job of creating dynamics that are so intriguing and detailed. For example, the way that Celaena and the king interact – it’s so different from what you would expect, and reading about them together in a scene always makes things interesting. It’s something about the dialogue and how Sarah J. Maas describes their body language and interactions that make you so interested in learning more about the history of a relationship or why two characters react the in specific ways around each other.

Since we’re already talking about relationships, I’m going to put it out there that I’m on Team Chaolena and nothing is going to change that. Okay, maybe it’s a little early to say that, since I have 3 more books to read and 2 books have yet to be published, but I really don’t think that I’ll be abandoning this ship. I love the dynamic between Chaol and Celaena. There’s something about the way they interact that feels familiar to me, and I love it when a fictional relationship feels familiar to me. It allows me to relate to the characters more and immerse myself even more into the story. However, that being said, I’ve heard several really mixed opinions about the love triangle in this series. Many people are still speculating about which couple is Sarah J. Maas’ planned endgame, and I know that there’s going to be more drama surrounding this love triangle in the next book.

Okay, now it’s time for me to admit that I’m feeling kind of stupid for not putting things together sooner when it came to the ending of the book. I had my suspicions, but somehow, I just didn’t quite put it all together in my mind. Maybe it was because it took me almost 2 weeks to finish the book, but I don’t think that’s actually the case. I think I just might not have paid enough attention to the book while I was reading it.

HOLD ON, I almost forgot to talk about the twists in this book! Okay, I’m not going to spoil it, but OH MY GOSH, I didn’t see them coming at all. I can’t believe things went in that direction and I have no idea how they’re going to continue to impact the series and characters. Definitely looking forward to finding out.

Oh, really quick story. I was reading this on a Sunday while sitting in a room with my guy friends at church. We were the last youth in the room and they were all playing their own games, so I pulled this out to read. When I got close to the ending, I decided to save it, so I closed the book. After closing the book, I hugged it as if it were a stuffed animal. One of my guy friends looked at me as I hugged the book and asked why I was hugging a hardcover. I made him hug it to show him how comfortable this book was to hold, and he just looked at me as if there was something wrong with me. I mean, there probably is, but I thought that his reaction was really funny. Meanwhile, my other guy friend just sat there and looked at me with utter confusion.

I really want to move on to the next book, but NaNoWriMo is starting and I don’t think I’ll have much time to read while that’s going on. I also promised to read another book during November, before I remembered that NaNoWriMo was going on. I honestly have no idea when I’ll pick up another book in this series, but hopefully, it’ll be soon because I’m so excited about continuing on with the story, the characters, and seeing what will happen in this crazy world.

Celaena is goals. I aspire to be like her. Which is kind of weird if you really think about it, because she can be really dark and menacing, but I want to be like her so badly. She even influenced one of my dreams last week and it only made me want to be like her even more. It’s just something about how strong she is, how she carries herself, and her skill that inspires me to become someone like that. Not an assassin, I don’t mean that, but someone who can really make a difference in the world.

It’s official. I’m in love with Chaol Westfall. He’s on my fictional boyfriend list and I don’t care if other people don’t like him. He reminds me a lot of Four, and I really love that about him. Of course, they still have their differences, but I love seeing their similarities as well. Chaol has these little moments that just make me smile and wish that I had someone in my life who is like him. The way he cares for Celaena and protects her gives me butterflies. In fact, he’s the reason why most of my notes about this book don’t focus on the plot, writing, or world-building. I spent my of my time just fangirling over Chaolena.

Nope, don’t care about Dorian. I just don’t find him that interesting. I mean, yes, he did have a more interesting arc in this book, but I still feel like I can’t relate to him or enjoy him like I should. It’s something about his personality and behavior that makes me roll my eyes at him every once in awhile.

Overall:
5 stars. If you haven’t picked this up after reading the first book, you really need to. And if you didn’t like the first book much for some reason, I promise that the series only gets better and that this book is absolutely fantastic. I already know that I’ll be making a few of my friends read this before we all graduate high school and go to different countries.