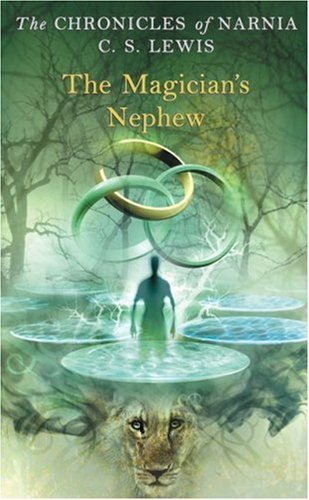 Just like the title said, this isn’t going to be like my other reviews, which are usually more in depth, going into the characters, the writing, and the details of the plot itself. But I thought that this was both such a short book, and also part of a bigger series, it would be better for me to review the series as whole when I finish it.
This is probably somewhere between my 7th-10th time re-reading The Magician’s Nephew. I think my dad bought me the first three books when I was about 6 or 7, and then he bought me the rest of the series. The funny thing was that the first three came in a box set, and when my dad bought me the rest of the books, it was another box set of the entire series. So I had 2 copies of the first 3 books, and I think I gave the first box set away to…someone.
From the time I started reading this book, I fell in love with the series. I had seen the animated movie and the live action movie before I first read any of the books, but I didn’t know that the infamous The Lion, The Witch, and The Wardrobe was actually the second book in the series. I didn’t even know that it was part of a series. When it came down to my beginning of exploring the series, I had no idea that it would go on to impact my life in the way that it did.
One of the reasons why my parents had me read the series in the first place is because C.S. Lewis is a Christian, and the Narnia series is written with a very strong and obvious overtone of Christianity. I think I’ve mentioned this in a couple of my earlier reviews that I’m a Christian (don’t worry, it’s not going to be something I keep bringing up on my blog), and that part of my life does play a big part in why I love this book and series so much.
My favorite thing about the book is probably the way it brought Narnia to life and told an origin story that didn’t feel too elaborate or confusing. The way it sets up the rest of the series brings about a connection that resonate throughout the series. For a Middle Grade book, this is probably one of my all-time favorites. It’s a book that I can read over and over again and never be bored of. The characters, the plot, the world, everything just speaks to me and has become one of the few series I’ve read as a child that I still think about 12 years later.
I know that not everyone likes this book, or even the series, because of it’s Christian overtones and how blatantly obvious it is that C.S. Lewis wanted to make the characters play counterparts to Christian beliefs and morals, but I think this is a classic that everyone should try. Maybe not in the order of The Magician’s Nephew as the first book, but start off with The Lion, The Witch, and The Wardrobe and see how you like it. It’s certainly not for everyone, but it’s a classic among a lot of readers.
Also, if you want a little bit of motivation, I’d suggest reading the Narnia series and also reading LOTR. Did you know that both series were written to settle a bet between the two authors, who were really good friends? It doesn’t sound like it would be possible, but the two series have a common theme that ties them together, and I think it would be fun if you guys read both to try and figure out what it is. I’ll do a blog post comparing the two series when I’m done with them, but in the meantime, I encourage you to try it out.

Read More »
PrevPrevious PostBookTubeAThon Wrap Up
Next PostReview: The Summer I Turned Pretty by Jenny HanNext