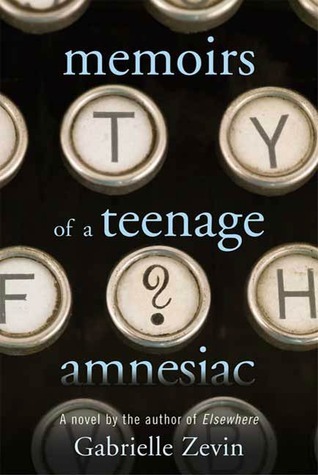 Synopsis:
Naomi has lost her memory of the last 4 years after landing at the bottom of a flight of stairs. She can't remember her boyfriend, her parents' divorce, her dad's new fiancée, or her best friend.

All the can remember is that a boy named James saved her, and that she really wants to kiss him.

Now, she has to remember who she was, and figure out if that's still who she is.

Thoughts:
I first heard about this ages ago when Ariel Bissett said that it was one of her favorite books. At the time, I was interested, but never seemed able to pick this up. Finally, after almost 2 years, I saw this at the library and knew that it was time to read it.

*Note: The book has elements of mental illness, specifically depression, that may upset some readers or trigger a reader. Please be careful if you intend to pick this up*

Despite being written 10 years ago, this book holds up really well for a YA. It's rare that a story translates so well across a decade of change and is still able to give the same impact. In all the time I spent reading this, I never really felt the differences in time. Sure, the protagonist, Naomi, may not have had a smartphone, but she still had a phone that she used throughout the book. It wasn't like she suddenly had an old Nokia brick that she pulled out.

I really enjoyed the story, mostly because it's less focused on high school romance than it is about personal identity. Yes, there are romantic subplots in the book, but for most of the story, it's about Naomi trying to figure out if she's the same girl she was before she had amnesia. Being that she lost 4 years of her memory, there were a lot of things she had to rediscover, like her hobbies and skills. In the end, the story was more about who Naomi was as a person than what her dating life was like.

There's quite a strong friendship element in the book, as Naomi's best friend, Will, does his best to help her remember things about her old life and how she can navigate her new life more easily. With her amnesia, it also gives Naomi a second chance at the friendships that she lost during high school. Because of this, we really get the time to explore what it's like to re-build friendships and discover the people who truly make life better.

The romance wasn't my favorite part, but I still enjoyed it. This book is less so about finding "The One" in high school and believing that you'll be together forever, and more about what real life is like - finding that you can love more than one person in your high school lifetime. It made for a more realistic and likable story, and I liked that it wasn't playing into the usual narrative of meeting "The One" in high school.

I felt very satisfied with the way things ended, as I didn't have any lingering questions or desires to know more. The storyline tapered out smoothly and left me happy. It's been awhile since a contemporary has done this, especially because I didn't feel like I had an urge to spend more time with the characters or know more about their story. For the first time in awhile, it was nice to close the book and feel like the characters' journey and mine came to an end at the perfect time and gave me everything I wanted.

Character(s):
I quite liked Naomi, even though there were times that she could be a little frustrating. It was understandable that she wasn't acting like a normal teenager, but still, there were times when I felt like she could have made better decisions. Nevertheless, I thought that her reactions were very appropriate considering her accident, and I enjoyed reading from her perspective.

Will was a really good best friend, even though he didn't always get the credit he deserved. There were many times when I could clearly see how much his friendship with Naomi meant to him. I almost wished he had a bigger role in the story, but seeing how everything fell into place, I can understand why he wasn't always around.

Overall:
5 stars. This has become one of my new favorite books. Maybe not one that I'll re-read all the time, but definitely one that I recommend other people to pick up.