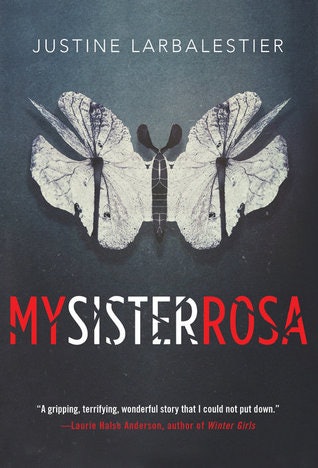 Che Taylor is a seventeen-year-old Aussie whose parents keep moving him around the world. They start companies and sell them for profit, but they won't listen to Che when he tells them that he's pretty sure there's something wrong with his ten-year-old sister Rosa.
Che knows that Rosa is different. There's something wrong with her. She's not like other kids her age, but their parents say she's just a shy, slow learner. Che knows that's not right - Rosa is a psychopath - and it's up to him to protect everyone from her.

I picked this up from the library the week before finals started, which was a dumb idea because I ended up having to return the book before I finished it. Luckily, I was able to borrow another copy over winter break when I went home with my roommate.

I'd heard about this quite awhile ago from Caz's channel (LittleBookOwl), and thought that it was really interesting. However, since it was initially published in Australia, I had to wait for it to be published in America before I could pick it up. So when I saw it at the library, I jumped at the chance to read it.

As far as I can remember, I've never read a book with an Australian main character before, so Che was a really refreshing character to have. Though the book is set in New York City, we get to learn a little about the Aussie culture through the phrases Che uses and the bits we get from his memory. I greatly enjoyed getting to see yet another culture in YA, and it makes me want to read more Australian-based YA.

Having always loved mysteries, thrillers, and psychopaths, I knew that I would love this book. Rarely have I seen any kind of fictional portrayal of young psychopaths (aside from the two episodes of Criminal Minds), and I've always been interested in what they would be like. This book did such a great job of not only portraying psychopathy well, but also what a young psychopath would be like. It was eerie to see how normal Rosa could be, all while knowing that she isn't a normal child.

Aside from spending his time trying to protect the world from Rosa and teaching her to be normal, Che is also trying to figure out his life. Having moved so much, he spent part of his teenaged life being homeschooled, and missing his friends back in Australia. The only thing that he kept consistently is boxing, which I found to be interesting. I've never read any other book that involved boxing, so it was really cool to get a glimpse into that sport and how its fighters train.

There's a romance in the book, but it felt so natural. Sure, Che may have been a little awkward and creepy in the beginning, but come on, the guy spent his life trying to deal with a psychopathic little sister and parents who keep moving them around the world, you really can't expect him to be that good with dating.
The romance was so easy to slip into, and I enjoyed it a lot. This was the second book in a short span of time that featured an interracial romance, the first being The Sun is Also A Star. I enjoyed seeing how Che and his love interest talked about their differences in a very respectful and understanding manner, and was pleased to see that none of it felt stereotypical or trope-y.

The pacing of the book was quite a whirlwind, but it never leaves you feeling like it's rushing too much. The book is so perfectly paced that you can really experience things along with Che. And it made for great suspense as we got closer to the end.

Once I got to the end of the book, I had so many feelings in me that I couldn't quite process all of it at once. I needed to let it sit for a few days as I raved about how good the book is. Even now, over a month after reading the book, I can't entirely put into words how I feel about the ending. It was everything necessary to wrap up the book, with just a little bit that leaves you wanting more. I just love this book, and that's all I know. If Justine Larbalestier were to write a companion or sequel to this, I would jump on that book immediately.

Character(s):
Che was a really interesting character because of how torn he is over Rosa. He loves his sister, but he also feels like he needs to protect the world from her. It makes for a wonderful complexity in him that I felt Larbalestier did really well. And, not to mention that he's a normal teenage boy trying to figure out what he wants in life and what steps he'll start taking toward his future. It was great to be in his head and see how he handled things, because honestly, I don't think I could have done any better.

Overall:
5 stars. If you're interested in this kind of book, I would definitely say to pick it up. It's dark and disturbing, so I know that it's not for everyone. There is also some swearing and mature content, if you're under 16 and have an inclination to pick this up.

NextReview: Darkness All Around by Doug Magee (Trigger Warning: Suicide)PrevReview: The Sun is Also A Star by Nicola Yoon